It’s hard to believe it’s already September and, although it may still feel like summer in Georgia, Fall means CARE’s 10thAnnual Entrepreneurial meeting is fast approaching! This year’s meeting will once again be held in Atlanta with industrious individuals from across the country flying in for a daylong meeting at the Hilton Garden Inn on Wednesday, October 23rd.
Given CARE’s mission is to encourage and facilitate market-driven solutions for the recycling and reuse of post-consumer carpet, the annual entrepreneur meeting is one of our favorite times of the year!  The event provides a chance for existing CARE members, as well as businesses that are hoping to get involved with carpet, to come together, share ideas, and network.
The meeting will kick off the Tuesday night prior with a reception dinner, also held at the hotel, to welcome weary travelers and offer opportunities for networking prior to the event. The following morning the meeting will officially commence at 8:30 am with some brief introductions before transitioning into the day’s first session, the ‘Marketplace Forum.’
As in previous years, the Forum offers an opportunity for all attendees to briefly go over what materials and services they currently offer for sale and/or what materials and services they are currently looking for. Past attendees have found this session very useful for generating conversation and ideas, essentially helping companies to link inputs to outputs and close loops.
The Forum will transition into updates from CARE’s New Products and Markets Committee, Marketing and Communications Committee, and PET Committee. Updates will then be succeeded by a more in depth conversation on PET, which makes up a steadily growing portion of the diverted carpet stream. While PET fiber is generally made from post-consumer plastic bottles and thus environmentally beneficial, opportunities to continue to repurpose the plastic once it’s in a carpet fiber form are currently limited. The discussion will report on CARE’s focused efforts to open PET opportunities.
Fortunately, if there is any place to move forward on the PET problem it’s at a conference full of entrepreneurs! That is, when you gather such enterprising individuals into one room the word problem dissolves into dozens of opportunities! However, it is well known that in the world of business an idea can only as good as its ultimate profitability and that is why a team approach is so vital at this stage.
The afternoon will cover a discussion of AB2398 in California as well as the status of similar EPR legislation under discussion in Connecticut, Delaware, Minnesota and Washington. The day will then appropriately close with a session dedicated to entrepreneurs, providing them time to discuss their current issues, concerns, and ideas.

The first Annual Entrepreneurs meeting back in 2003 may have had less than 30 participants but it was a huge success. Since that inaugural year participation and interest in carpet recycling has only grown. CARE has been very pleased with the level of thoughtful conversation and energy participants have brought to previous years’ conferences and is very excited to see what ideas and relationships this year’s meeting will generate.
As the president of the Dalton-based Carpet and Rug Institute, Werner Braun, wrote in reflection of last year’s conference, “What’s unique about CARE is that it combines meeting our collective goal (reducing waste) and encouraging private enterprise (creating businesses) in a win-win partnership that benefits both the environment and the economy” (CRI, November 2012).
On that note, CARE would like to give a big thanks to this year’s sponsors: Aquafil’s Econyl Brand, Interface, Shaw Floors and Starnet Worldwide, and looks forward to seeing many of you shortly!
In 2006 California became the first state to pass legislation that directly recognized the occurrence of global warming. AB32, otherwise known as the Global Warming Solutions Act, set out to proactively fight climate change by establishing a comprehensive program to achieve a 25% reduction in greenhouse gas (GHG) emissions by 2020, essentially returning the state to a 1990 emissions level. While the legislation was both innovative and laudable, it was also necessary; at that time California was the 12th largest emitter of carbon worldwide.
Carbon dioxide (CO2) is the principal GHG in our atmosphere making up 84% of annual emissions (EPA, 2011). However, when it comes to assessing the harm of GHGs volume is not the best metric. That is, while methane only accounts for 9% of GHG, it is 20 times ‘better’ than carbon at trapping radiation in the atmosphere, and thus 20 times more effective at contributing to our planet’s gradual warming.
Just as with other GHGs, methane can be released to the atmosphere through natural causes but human activities such as the raising of livestock, natural gas extraction and landfilling waste have thrown the planet’s innate cycles out of whack.
With respect to the latter, when not properly capped landfills release approximately 60% methane and 40% carbon dioxide.  In 2000 the EPA estimated that the ~6,000 landfills across the U.S. were contributing roughly 450-650 billion cubic feet of methane to the atmosphere per year.
Consequently, limiting the amount of trash that ends up in landfills is an easy way to reduce emissions, not to mention conserve valuable resources, prevent groundwater contamination, avoid community displacement, among other benefits.
While California currently leads the nation with a 59% recycling rate for all materials, they want to do better. Specifically, in 2011 Governor Jerry Brown set a goal for 75% diversion of waste from landfills by 2020. Individually, cities of San Francisco and Los Angeles have set even more aggressive goals of zero waste.
This is where the California Department of Resources Recycling and Recovery (CalRecycle) steps up. Headquartered in Sacramento, but with regional offices in Los Angeles, Long Beach, Riverside and San Diego, CalRecycle is the state’s leading authority on recycling, waste reduction, and product reuse.
In order to understand just what businesses were contributing, in 2008 CalRecycle hired Cascadia Consulting group to perform a comprehensive waste characterization study. The study found carpet to be among the top ten materials going to California landfills. CARE also has devised a good estimate of the annual flow of post-consumer carpet going to California landfills based in sales of new carpet into the state. More information may be found in the CARE Annual Report to CalRecycle on page 19.
Although carpet is a small percentage of that state’s total waste, it is big and bulky and finding ways to eliminate 1.3 million tons from landfills a year is not to be overlooked. Furthermore, targeting carpet falls in line with CalReycle’s aim to be as efficient and effective with their time and money as possible. That is, no matter if you are a single-family home or commercial store, you probably have bought or disposed of carpet at some point in your life.  CARE has made good progress in growing both landfill diversion (recovery) and recycled output of used carpet as shown in the following graph. 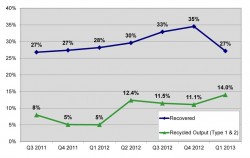 In particular, CalRecycle focuses a large portion of their energy on education and outreach to the commercial sector whose waste makes up about two-thirds of California’s total waste stream. That said, in the end, any way to reduce the amount of post-consumer carpet that ends up in landfills is a great way to free up a vast amount of landfill space. Additionally, since post-consumer carpet is actually quite a valuable resource, recovered and reused material further reduces emissions by eliminating the energy required to extract virgin material.
It is not surprising then that CalRecycle sees AB2398 as both incredibly important and exciting. As the overseer of CARE’s development of an implementation plan, CalRecycle plays a pivotal role in how successful the legislation will be.
With respect to the legislation’s initial hiccups, in a recent conversation with Mark Oldfield, Communications Director at CalRecycle, he summarized AB2398 nicely when he pointed out that all new programs are guaranteed to have challenges but that without taking the initiative to create them you won’t ever reach goals. In other words, the age old wisdom that the best rewards come from hard work holds true.
Overall Mark said the department “is very happy with CalRecycle’s collaborative relationship with CARE and the healthy discussions they have been having to move things along in a positive manner.” He is optimistic that they will ultimately see a plan that works for everyone and perhaps a great way to measure the legislation’s initial success will be through the new waste characterization study CalRecycle hopes to perform in the coming year.
In the meantime, CARE looks forward to continuing to work with CalRecycle to develop the most efficient and effective Carpet Recycling Plan possible!