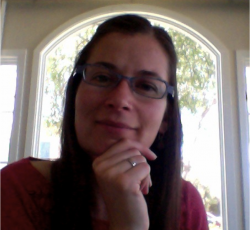 Brennen Jensen is the founder and director/principal of Emerging Ecologies. She has led programs to create sustainable, engaged, and resilient communities inspired by nature. In recent years, her efforts helped to secure over $38 million in funding for environmental programs and diverted over 4 million pounds of waste from local California landfills. We’re pleased to announce that Ms. Jensen is joining CARE to assist in managing the California Carpet Stewardship Program established under AB2398.

Brennen has a BS in Environmental Science Technology with concentrations in Landscape Ecosystems and Wilderness Conservation from Humboldt State University, as well as a BA in Spanish. She is currently pursuing a master’s degree in Biomimicry in collaboration with Arizona State University. Brennen is the recipient of numerous awards, including the California Department of Conservation Comprehensive Recycling Community Award and Ecology Action Five-Year Service Award.
Brennen has over a decade of experience conceiving and implementing strategic environmental and community-based programs and initiatives that address the most pressing social and environmental challenges of our time. Ms. Jensen served at the helm of the statewide implementation team for Energy Upgrade California helping to unite 58 counties, over 500 cities, and the 4 major California utilities in common purpose. With a background in government, private and non-profit organizations, Brennen has a cooperative facilitative approach that seeks to find creative solutions to complex problems, while expanding localized opportunities for waste and emissions reduction throughout California and beyond.
In her new role, Brennen will be responsible for assisting existing and potential carpet recyclers and processors with general manufacturing, communication, and business issues; managing the expansion of the Rural County Program that provides access to carpet recycling for consumers in rural areas; participating in regular visits and reviews of recycling facilities; and developing education, communications and outreach programs for targeted audiences.
“We are thrilled to have Brennen join the CARE team”, says Bob Peoples, Executive Director of CARE. “Brennen brings a solid reputation and significant experience and understanding of the California marketplace to CARE. We look forward to successful growth of the Program under her leadership.”
Although we don’t usually think about the chemistry behind carpet fiber, it’s a major component of carpet sustainability because almost all face fiber is produced from synthetic polymers. Synthetic polymers were discovered nearly 100 years ago but today, green chemistry is rapidly changing the way they are manufactured as well as the polymers themselves.
Green chemistry is a design philosophy that seeks to reduce the impact of chemical substances on humans, animals, plants, and the environment. There are two primary ways to achieve that goal. First, maximize efficiency and reduce or eliminate unnecessary chemicals and processing steps. Second, reduce or eliminate hazardous and toxic chemicals to reduce the risk if exposure occurs. Whether applied to the initial laboratory synthesis or volume manufacturing, green chemistry offers a way to reduce the impact, risk, and expense of chemical production. The core concepts of green chemistry are best demonstrated through the 12 Principles of Green Chemistry:
What does all that mean for carpet? Let’s take a look at Nylon 6,6.
The traditional synthesis of nylon 6,6 is a two-step process that first combines cyclohexene and nitric acid to produced adipic acid, which is then combined with hexamethylene diamine under high pressure to produce nylon. Cyclohexene is a reasonably safe chemical, but it is produced from benzene, which is obtained from crude oil and is a known carcinogen. Nitric acid also poses environmental risks and the results in the emission of nitrous oxide (N2O), a greenhouse gas.

What would it take for the carpet industry to consider blending PCC PET back into flake for extrusion into PET carpet fiber? What are some new uses and applications for PCC PET? CARE will provide research grants to researchers at a California university who are interested in exploring these questions. The research proposal should be a multidisciplinary effort including materials science, product development, and market analysis and modeling. The deadline for submissions is December 20, 2013. Learn more about the grant and application process.
Discarded fishing gear is a huge problem. A reportfrom the UN Food and Agriculture Organization estimates that 640,000 tons of fishing gear is discarded annually that washes up on beaches, sinks to the ocean floor, collects in floating garbage patches, and tangles fish, birds, and other wildlife. Typically made from nylon to improve its stability in salt water, it takes centuries for the fishing gear to biodegrade.
Carpet manufacturer Interface and the Zoological Society of London have teamed up to form NetWorks, a joint-initiative to collect abandoned nylon fishing gear and turn it into new carpets by reprocessing the nylon. 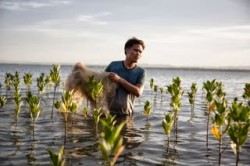 A pilot project at the Danajon Bank in the Philippines involved 892 local fishers and their families collecting discarded nets in exchange for rice. Local families live in extreme poverty and the program provides a practical alternative to fishing as catches decline from overfishing. The program has recovered nine tons of discarded fishing gear during the one-year pilot. NetWorks hopes to expand the program to neighboring areas in the Philippines and beyond.
After collection, the recovered fishing gear is sent to Aquafil, which reprocesses the nylon into fresh yarns using their Econyl process. The yarns, made of 100 percent recycled material, is then sold back to Interface for manufacturing carpet tiles. Interface is launching a new product line called Net Effect, which will be made from the recovered fishing gear and consists of up to 81 percent total recycled content.
By creating a new market for discarded fishing nets, the NetWorks project will help reduce pollution and alleviate hunger in more places as it expands. We hope that it encourages fisherman to recognize the value of their nets and to prevent pollution at the source.