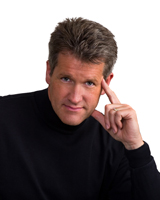 Craig Karges is truly extraordinary! The “extraordinist” is an award winning entertainer, a nationally recognized speaker and an author. He has made over four thousand appearances on four continents and in all fifty states.

Craig Karges’ performance is an extraordinary blend of mystery, humor, psychology and intuition. Karges dazzles the mind as he challenges his audiences to question what is real and what is unreal, what is possible and what is impossible. Dennis Miller, comedian and talk show host, put it this way after seeing Karges perform, “this weirds me out.”
A table “walks” on stage and then flies into the air! Borrowed finger rings from audience members are linked together in a chain! Thoughts are read and predictions are made and verified. Craig Karges risks his fee in a special demonstration. If he fails, the money is returned to the sponsor!

Craig Karges dramatizes the unknown, the unexplained and the unbelievable. You don’t just watch this performance, you experience it, through total audience participation. 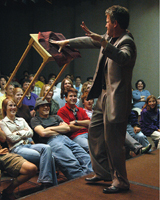 Audiences may be mystified when it comes to understanding how Craig Karges accomplishes what he does on stage but his popularity is no mystery at all.

A former marketing executive in the foodservice industries, and the individual responsible for Kentucky Fried Chicken home delivery service, Rod Muir brings a fresh perspective to the solutions, to the challenge of diverting solid waste.

As Founder of Waste Diversion Canada and the Waste Diversion Campaigner for the Sierra Club of Canada Rod is putting his evil powers to good promoting the surprisingly signifcant connection between waste diversion and the mitigation of climate change.

Thank you to our conference sponsors:

Following on a solid performance in Q1 and Q2 2021, the California Program’s recycling rate for Q3 … END_OF_DOCUMENT_TOKEN_TO_BE_REPLACED