CARE awarded the company $350,000 for equipment to manufacture PCC pellets in its new facility, opened in 2016 and located in a Recycling Market Development Zone east of Sacramento. Final products that incorporate CLEAR pellets include shelves, toolboxes and pallets sold by companies such as Lowe’s, and concrete forms incorporating calcium carbonate material from PCC backing. CLEAR also is exploring the manufacturing of PET-based car fiber pad (referred to as shoddy), which is nested within car door interiors. 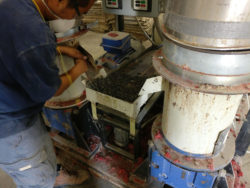 All of CLEAR’s grant-funded equipment was installed in June 2016, and equipment was added in August to increase the quality and quantity of recycled PCC output. Currently, This project brings additional processing capacity to the state, as well as seven new California jobs.

Clear President Nick Fiore commented,”It is exciting to see several good recycling initiatives rolling out. I believe due to the vision of Cal Recycle and CARE and the grant programs, we will see innovation that will affect not only the California market but will drive change nationally to finally get carpet out of the landfills in significant amounts. These types of programs take time to develop, but we are grateful for the grant and for the support given to us by CARE staff in development and best business practices.”

2019 was a significant year for the CARE California Carpet Stewardship Grants Program, which is … END_OF_DOCUMENT_TOKEN_TO_BE_REPLACED