The 5th Annual CARE Conference is behind us, but what an event it was! The Spring Edition of the CARE Newsletter traditionally focuses on highlights from the conference and this year will be no exception. If I had to pick two words to sum up the event they would be – wildly successful. All of our feedback has been positive and a record 163 attendees registered for the event. I personally think the highlights of this year’s event were the announcements and the 16% increase in diversion vs. 2005 to 261 million pounds. While we did not hit our original forecast, a 16% increase under some tough economic conditions is pretty darn good. In addition, in May of 2006 there were 16 reclamation centers in the U.S. One year later in May of 2007, that number had climbed to 52 or a 225% increase! Details are outlined below and please take time to download the 2006 CARE Annual Report. The format is new and we want to thank PencilBox and Martin Flaherty for his generous support to make this possible.

CARE continues to enjoy rapid growth in our diversion rates, the percentage of PC carpet going to higher value outlets (that is a drop going to wTe), attendance, sponsors and web activity. We still have a long way to go and we believe the second half of 2007 will see additional options for PC carpet coming on line. In fact, we expect the landscape in May 2008 to be quite different than it is today. So until next year’s conference…

The Carpet America Recovery Effort (CARE) recently held it 5th Annual Conference in Charleston, SC and it proved to be a rousing success as 163 registered attendees gathered for some lively discussion. Since CARE first began holding its Annual Conference in 2003, the number of attendees continues to grow each year. This year’s registered attendance marked a 54% increase over last year’s conference.

Highlights of the 2006 Annual Survey, conducted by Weston Solutions, Inc. and 5th Annual Conference include the following: 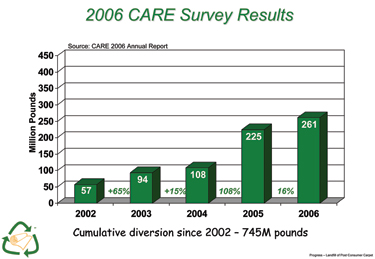 Here is a sampling of comments received back from conference participants:

Charleston, SC, May 9, 2007 – Both CarpetCycle and InterFaceFlor were recognized recently as Recyclers of the Year by the Carpet America Recovery Effort (CARE) at the organization’s Fifth Annual Conference at the historic Francis Marion Hotel in Charleston, SC.

As part of the fifth year anniversary of the non-profit organization, this year’s recycler of the year award was divided into a large company division and a small company division for the first time in an effort to better recognize the drivers behind this new industry of post-consumer carpet recycling.

Lorence Moot, executive vice president of Project Consultants & Associates, was also honored as this year’s recipient of the prestigious Care Person of the Year at the gala.

Carpet recycling has just gotten easier with the expansion of carpet reclamation facilities across the U.S. CARE is pleased to announce that its Reclamation Partnership has now grown to 52 facilities actively accepting and processing post-consumer carpet for recycling and reuse. Currently, 50% of all states in the U.S. now have carpet reclamation facilities in place. Ohio and Pennsylvania’s are the most recent additions to the nationwide infrastructure that CARE is helping to develop.

CARE would like to announce the election of two new members to its Board of Directors. 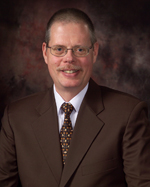 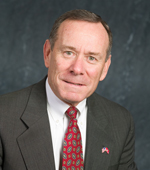 Fred Williamson, Director of Special Projects for StarNet Commercial Flooring Cooperative Inc., has 36 years of experience in the commercial flooring business. In addition to working with StarNet’s 158 member firms, Fred gives back to his local community by serving as Secretary of the Board of Wagner College’s Board of Trustees in Staten Island, NY.

CARE would like to welcome its two new Board Members and thank its existing Board Members for the commitment they make to ensure the success of this new industry. Without their knowledge and dedication the recovery effort and the CARE Organization would not be where it is today.

CARE’s Board of Directors

April 19, 2007 – CARE, StarNet, and Antron celebrate Earthday at the RD Weis Companies’ Healthy Planet, Healthy People gala in Manhattan, NY. Dr. Robert Peoples was in attendance to spread the word about the growing carpet reclamation movement and how it can positively impact the A & D community. Information was shared about the successful CARE/StarNet partnership, as well as, Antron’s carpet reclamation program.

In the tradition of past Earthdays, attendees at RD Weis’ Earthday event sported retro tie dyed t-shirts created on site with the recycling logo emblazoned on the front. Attendees were also treated to vital information about sustainability from experts in their respective fields.

The StarNet Annual Membership Meeting, held April 12th in Phoenix, Arizona, was very special in several ways. The festive occasion marked the 15th “Birthday” of the Cooperative and the introduction of Jeanne Matson, new President and CEO of the cooperative, who is replacing Lori Dowling on her retirement later this month. The event also marked the 10th Anniversary of presentation of the StarNet Design Awards, which included the first award for a new category – “Environmental Achievement”. Dr. Bob Peoples, Executive Director of CARE, presented this award to Ian Martin, Vice President of Commercial Sales for Great Floors. The Spokane Convention Center Expansion Project (Silver LEED) is the winning entry. In presenting this new prestigious award, Dr. Peoples commented that when the power of a winning organization, and StarNet is a winning organization, gets behind carpet recycling we greatly increase our odds for success.

Mr. Rick Fedrizzi, President and Founder of USGBC was the keynote speaker of this environmentally focused event. His dynamic presentation was enthusiastically received by the entire StarNet Membership and its assembled manufacturing partners. Mr. Fredrizzi praised StarNet Members for assuming an environmental leadership role in the commercial flooring industry. He emphasized the need for and encouraged continued diligence in making a positive environmental impact on our world.

A new annual award was also announced, the StarNet/CARE Carpet Reclamation Award. All StarNet Members are participating in this initiative to track landfill diversion of post-consumer carpet. Two Members (medium and large categories) will be recognized for the most post-consumer carpet landfill diverted in a 12 month period as well as their timely reporting. The award will be presented in Orlando, Florida at the next StarNet Annual Membership Meeting.

During the report of StarNet’s Environmental Issues Committee several StarNet Members were recognized for their local carpet reclamation initiatives. Fred Williamson, StarNet Director of Special Projects, noted that the StarNet/CARE partnership continues to grow and is keeping StarNet Members on the cutting edge of carpet reclamation developments. In his remarks to the StarNet Membership, Dr. Peoples provided a current status on sustainability issues impacting the carpet industry, including the latest developments in Green Label Plus and the Seal of Approval program, both of which impact the useful life of a carpet and can help reduce the environmental footprint. In addition, the new green carpet standard, NSF 140, was also reviewed.

Working in a true partnership, Sergenian’s Floor Coverings and Reynolds Recycling in Madison, Wisconsin have joined forces to be the first dealer in the United States to say, “all carpeting and pad the company removes will be recycled or converted into energy.” Sergenian’s, a StarNet Network member company had been working on a solution for reuse of post-consumer carpet for a long time. At the same time Reynolds Recycling was starting up their reclamation program with Shaw Industries so the timing was perfect. We see it as a collaboration that has led to a great outcome: Sergenian’s + StarNet + Reynolds + Shaw + CARE = Success!

The Carpet America Recovery Effort (CARE) was recognized by the Environmental Business Journal during an awards ceremony at the Environmental Industry Summit 2007 on February 28th in Coronado, California. CARE was awarded the EBJ Public-Sector/Non-Profit Merit Award. CARE was honored for its work in facilitating the growth of a new U.S. industry to support carpet recycling, while reducing the total amount of post-consumer carpet disposal through recovery, recycling, and reuse.

The Carpet America Recovery Effort (CARE) was presented the Society of Plastic Engineers’ (SPE) first Dan Eberhardt Environmental Stewardship Award on March 7th during the 2007 GPEC Conference in Orlando, Florida. The SPE Plastics Environmental Division recognized CARE for its achievement in the recovery, reuse, and recycling of post-consumer carpet.

An award from the Society of Plastic Engineers highlights the fact that CARE significantly contributes to the overall recovery and recycling of thermoplastics in the United States through carpet landfill diversion. Since its inception in 2002, CARE has helped to keep over 3/4 billion pounds of post-consumer carpet out of landfills. Dr. Robert Peoples, CARE’s Executive Director, accepted the award on CARE’s behalf. During the award acceptance speech, Dr. Peoples expressed his gratitude for SPE’s recognition of CARE’s environmental achievements and the hard work and dedication provided by the CARE community to make this new recycling industry a success. Dr. Peoples stated, “We are both honored and humbled to be recognized by GPEC for the first Dan Eberhardt award.” Dan Eberhardt was an environmental leader in plastics recycling.

Also honored at the Society of Plastic Engineers’ award ceremony was Los Angeles Fiber, the largest recycler of post-consumer carpets in the world, for their recycling and recovery of post-consumer carpets. Their production process, logistics system, and sales programs all work together to divert 100 million pounds per year of post- consumer carpet from our nation’s landfills. The SPE Plastics Environmental Division recognized Los Angeles Fiber for the significant impact they had on the recovery of thermoplastic by awarding them the 2007 SPE’s Plastics Recycling Award.

CARE is issuing this Request for Proposals (RFP) to seek an individual(s) or an organization for execution of an independent assessment against the MOU requirements. The focus of this project is to conduct a thorough analysis of CARE’s performance since inception in January 2002 through the end of 2007.

CARE is excited to announce the addition of three new corporate sponsors to the growing carpet reclamation movement.

Everyone of us can make a difference-if we choose to!

Do you have an interesting story or factoid about recycling carpet? Send it to CARE by email.

Thank you very much for visiting us in Amprior recently to tour our site and tell us about CARE. Your presentation was one of the most informative and enjoyable that I have participated in. Our group appreciated your enthusiasm and professionalism as well as the important message that you delivered.

I must say that last week was a tremendous eye opener for this old boy. It will impact me and folks I interface with till the end of time.

We would like your feedback on this newsletter, ideas, concerns, or questions. We’ll include them in future newsletters.

Thomas Coates joined CARE as the California Program Director in July 2022. Here he talks about his … END_OF_DOCUMENT_TOKEN_TO_BE_REPLACED